Images of the beads are published by Unimus, the joint web portal of the Norwegian university museums, alongside the other finds from the same grave. They are divided into six groups numbered 4 to 9. The two most unique beads make up groups 4 and 5 on their own, and two pairs of similar ones are kept together in groups 6 and 8. The remaining twelve beads, however, seems to be divided arbitrarily between groups 7 and 9. In this discussion, each bead is assigned an ID based on the Unimus grouping, with a Greek letter added indicating its position within the Unimus images (in normal reading order, α being the top left).

Because the top-down viewpoint of the majority of the Unimus images reveal little of the beads' decoration, they are supplemented here by photos taken by Hilde Thunem (and adapted by Tor Gjerde) of the beads in the display case at Stiklestad National Culture Centre where they are currently exhibited, and of the large black glass bead (currently stored at The museum of Natural History and Archeology, Norwegian University of Science and Technology - NTNU Vitenskapsmuseet).

Left: The Unimus images rearranged based on similarities in the properties of the beads.

Reconstructions of the beads

A reconstruction of the beads was made by Atelier Cobalt based on the photographs and measurements. 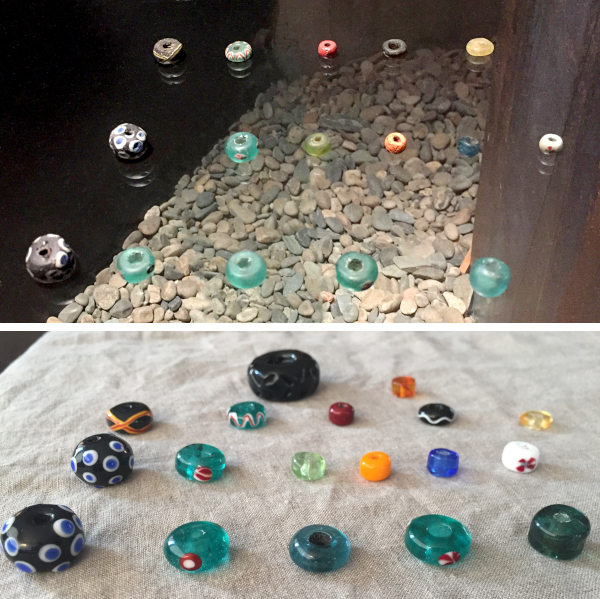